Hector Barcilon was born in Egypt in 1908 and became a naturalized British subject in 1930. He studied at Victoria College, Alexandria, Clifton and Cambridge and was called to the Bar in England in 1931. He practised at HMB Counsellor Court in Egypt until 1938 when he took up private practice in London.

At the outbreak of WWII Mr. Barcilon was called up and commissioned in the Royal Artillery. He served in the Far East until he was taken prisoner by the Japanese – During the period of his captivity as a prisoner of war, he was forced to work on the infamous Siam Railway project. After the cessation of hostilities he served in the office of the Judge Advocate General and in 1950 was released from service with the rank of Major. He continued to serve in the Judge Advocate’s Office as a civilian until 1952 when he resumed private practice in London.

On 27 March 1956 he was appointed to the post of Solicitor General in Bermuda and he held that position until his appointment as the first Bermuda Puisne Judge in 1965. Mr. Barcilon also served on the Law Reform Committee, the Bermuda Bar Council, the English Speaking Union, was the first Rent Commissioner and also served as the Administrator of Government Employment’s Health Insurance Scheme.

Mr. Barcilon died in 1988 following a struggle with cancer. Upon his death it was said by Peter Smith that Mr. Barcilon “set a very high standard of advocacy because of his integrity and skill together with his vast knowledge of law and the Rules of Evidence” and that “he had an incredible knack for exposing justice where it was…..woebitide anyone lying in the witness box”. Peter Smith also said that Mr. Barcilon would “surely find out”. However, Mr. Barcilon had a fine reputation in the legal fraternity for being scrupulously fair with an unmatched ability for dealing with other people.

It is hoped that the memory of this great man and his contributions to Bermuda and Bermuda law will continue through the Annual Hector Barcilon Memorial Moot.

BAR COUNCIL’S ROLE AND HOW THE MEMORIAL CAME ABOUT

The first Memorial Moot took place in 1990. It was spearheaded by Andrew Martin, Narinder Hargun and John Riihiluoma who sat on Bar Council in the early 1990s together. They wanted to remember the legacy of their dear friend Hector by bringing together the Lawyers, Judges, Magistrates, and the Law students in a fun and relaxing environment which in turn fosters respect and a lasting relationship within the legal community and the Judiciary.

Bermudian, Spouse of a Bermudian and Permanent Residency Holder Law students are invited to sign up for the moot. Students having completed the LPC or BPTC course may sign up. Students should not apply if they have already started a pupilage.

The event takes place almost yearly with the winning teams names added to the Hector Barcilon Memorial Shield. There are prizes and momentos to each participant.

(b) The team that is declared winner of the moot shall be the advocates who have presented their case with the greatest oral skills and legal clarity.

The simplest way to describe a 'moot' or 'mooting' is the oral presentation of a legal issue or problem. It is perhaps the closest experience that a student can have while at college or university to appearing in court. As many first year law students will be aware, the legal profession (be it as a barrister or as a solicitor) is an increasingly difficult one to enter. Application forms for legal professional courses, solicitors’ firms and barristers’ chambers often demand that a candidate has, and can provide evidence of, their advocacy or mooting experience whilst at university (over and above any of the more traditional areas of advocacy such as debating). So for the sake of your future career it is worth gaining some mooting experience whether or not the activity is compulsory at your law school.

Mooting as an exercise may enhance your overall understanding and knowledge of particular areas of law and also enhance overall confidence in public speaking, general research, and presentation skills. In other words mooting experience can benefit every student whether or not they plan to follow a traditional legal career path upon graduation.

Prizes included a monetary gift, engraved gift and a goody bag for each participant. The names of the winning team members will be added to the Hector Barcilon Memorial Moot Shield which is kept at the Bar Office. This year, there was also a trophy handed to the winning team to display at the victorious law firm’s location Appleby to be returned to the Bar Office just prior to the following years Moot.

The 2020 moot will take place in August with the date to be decided. Bermudian, Spouse of a Bermudian, and Permanent Residency Certificate Holder enquiries may be submitted to the Bar Office at bdabar@logic.bm

HECTOR BARCILON MEMORIAL MOOT 16 AUGUST 2019: Hosted once again by the Bermuda Young Lawyers Group ('BYLG'), the Hector Barcilon Memorial Moot 2019 was held on August 16th 2019 at the Supreme Court Room  #1 in the Sessions House. We had six (6) participants separated in to two teams of three members each. The legal question this year was a criminal appeal, the judges for the Moot were Chief Justice Hargun,  Acting Senior Magistrate Maxanne Anderson, and former Bar President Richard Horseman. The Moot was well contested and both teams conducted themselves with high regard and the advocacy was very good. The judges and the BYLG were extremely impressed with the hard work that was displayed. In 2020, we look forward to a higher turn out from the Bar and student in general. We also wish to thank the Bar for the support, the Argus Group for donating gift bags on the behalf of the Honorary Secretary of Bar Council, and the wining team of Ashley Fubler, Taznae' Fubler and Matthew Frick. 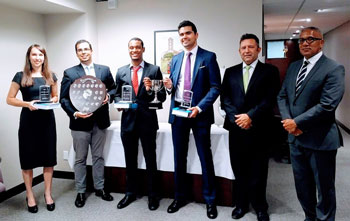 HECTOR BARCILON MEMORIAL MOOT HELD FRIDAY 17 AUGUST 2018: The Bermuda Young Lawyers Group (“BYLG”) hosted the 2018 Hector Barcilon Memorial Moot (“Moot”) on Friday, August 17, 2018, in Court #1 in Sessions House. Following high-quality advocacy and in the face of intense questioning from this year’s judging panel, the BYLG is pleased to announce that Team Appleby was selected by the panel as the winner of this year’s mooting competition, meaning that Appleby has retained the winner’s cup. The panel of esteemed judges for the Moot consisted of Mr. Mark Diel (Director at Marshall Diel & Myers Limited), Mr. Larry Mussenden (Director of Public Prosecutions) and Mr. Richard Horseman (Director at Wakefield Quin Limited and former President of Bar Council). The Moot participants this year were:

The members of Team Appleby, as the winning team, each received an individual winner’s trophy, with the winner’s cup to be put on show at Appleby and an engraved plaque to be displayed at the Bar Association offices. Each member of Team Appleby and Team Conyers also received a monetary prize and a signed copy of the second edition of Former Chief Justice Ian Kawaley’s text “Offshore Commercial Law in Bermuda.” Friends, family and members of the Bermuda Bar congratulated the Moot participants at a prize giving and reception at the Bar Association offices. The Leadership Committee of the BYLG (“Committee”) would like to thank each member of Team Appleby and Team Conyers for their hard work and participation in this year’s Moot. In addition, the Committee wishes to thank each member of the panel for their time in reading the submissions, authorities and other materials, and for their engagement with the Moot participants on the day, as well as for their thoughtful questions and judgment at the Moot. The Committee also extends a thank you to Annwen Stirling for her efforts in coordinating the reception and her assistance during the organization of this event. Thank you as well to all those who attended the Moot and reception for your support. A formal press release will be issued in due course and circulated to the Bar Membership. Thank you, Leadership Committee - Bermuda Young Lawyers Group. 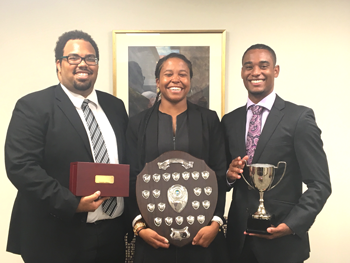 RESULTS - HECTOR BARCILON MEMORIAL MOOT 11 AUGUST 2017: Team Appleby won the mooting competition this year over the Mixed team and have retained the Cup which we understand is proudly on display at the reception desk of Appleby!  The event started off at Commercial Court #2 but with the influx of support from friends and family, all had to be directed into the larger court #1.  The Moot Judges panel was made up of The Hon. Justice Stephen Hellman, the Director of Public Prosecutions Mr. Larry Mussenden, and Parliamentary Counsel Mr. Anthony Richardson. Refreshments and the prize giving followed at Appleby (Bermuda) Limited.

This year’s Moot Question was a civil dispute amongst family about whether there was a concluded contract to purchase property, complicated by there being a non-Bermudian involved.