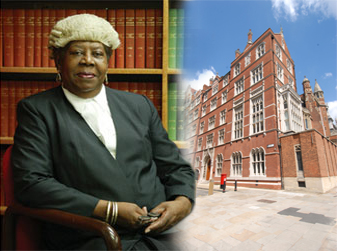 The Bermuda Bar Association in conjunction with Carmelite Chambers in London, England invites Bermudian law students intending to practice criminal law to apply for the prestigious Dame Lois Browne-Evans Pupilage Award. This is a unique opportunity to obtain valuable experience which is not generally available to Bermudian pupils.

Bar Council were deeply saddened by the passing of Dame Lois Browne-Evans. She was a mentor, a friend, and an advocate to many a Bermudian who dreamed of a future in Law; she is greatly missed.

Bar Council decided it would be most befitting and appropriate to provide a Criminal Law Pupilage to a Bermudian in her memory; The Dame Lois Browne-Evans Award.

Many thousands of students apply for pupilages each year in the UK, and due to very few spaces being available many will not be successful. Receiving permission for the Bermudian to receive training is without a doubt a great privilege. The pupil upon completion of the training will return to Bermuda and become a member of the Criminal bar.

The Dame Lois Browne-Evans Award provides the opportunity to an outstanding Bermudian candidate to have 6 or 12 months pupilage at Carmelite Chambers, a leading criminal set in London, England. We are also very pleased to announce that exceptionally we are able to open this opportunity to LPC as well as BVC candidates.

All applicants must have completed or be in the process of completing the LPC or BPTC course and have the current intention to practice in the field of criminal law. The applicant must also be eligible to apply for or be in possession of a EU or UK passport.

The successful applicant will receive:

Option 1: Bursary $12, 500K. Six month extensive training/mini pupilage at Carmelite Chambers where the LPC pupil (applicant would be required to do a further six month articles/pupilage in a Bermuda or equivalent jurisdiction firm in order to be called to the Bermuda Bar under section 51(1)(a)(ii)(aa) of the Supreme Court Act.)

Option 2: Bursary $25K. Full 12 month Extensive training/mini pupilage at Carmelite Chambers. NB the applicant as a non BPTC candidate will not be in a position in the second six months training to undertake any work in their own right, and will only shadow a Barrister in Chambers. No salary is payable from Carmelite Chambers. The candidate will not be called to the UK Bar but would be eligible to be called to the Bermuda Bar under section 51(1)(a)(ii)(aa) of the Supreme Court Act.

Carmelite Chambers is one of the largest and longest established sets in the United Kingdom and its barristers are regularly instructed in high profile criminal cases both in the United Kingdom and internationally. Competition for pupilage places is incredibly fierce and a pupilage at Carmelite Chambers is a once in a lifetime training opportunity for the successful Applicant.

The Award Committee is presided over by the Chief Justice of the Supreme Court of Bermuda and the Award Committee will be looking to assess academic and intellectual abilities, skills in oral and written communications, and an understanding of and an interest in the practice of criminal law.

Applicants must have completed or be in the process of completing the LPC or BPTC course and have the current intention to practice in the field of criminal law.

Applicants should submit the following documentation:

Address your application to: